AdviceWorkplaceVideosTrainingArticles
NEXT PREVIOUS BACK TO INDEX
Advice

Why do some science and engineering projects succeed while others fail? There are many factors that can influence the outcome of a project, but one of the most important is the combined skills and abilities of the project manager (PM) at its helm.

But this begs another question: what exactly makes a project manager “skilled and able?” Are there common traits, habits, philosophies, and/or techniques that the most successful PMs share, and if so, what are they? 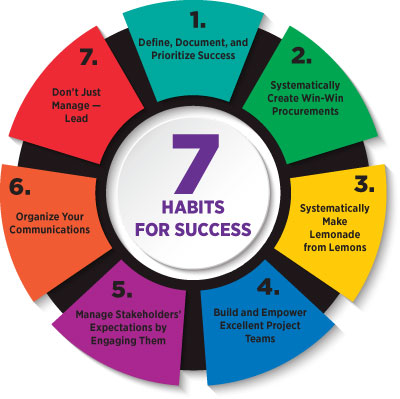 TALKING TO THE EXPERTS

As part of a study to uncover PM success habits, two separate surveys were conducted. The first was an online survey of 454 professional engineering project managers. This group was asked to identify the key habits, best practices, and/or unique skills they felt made the difference between success and failure in their engineering projects.

The data from this survey were then sorted and used to baseline a set of seven core habits and skills required for project success.

In a parallel survey, we interviewed 43 well-known, high-level project managers working on “big science” projects, including many in the astronomy and aerospace fields. These 43 PMs are considered some of the most successful in the industry. Most have decades of experience and work on high-profile projects worth hundreds of millions of dollars (US).

These 43 highly experienced PMs were also asked to identify what separates successful projects from unsuccessful projects. Unsurprisingly, the responses from the 43 expert PMs closely mirrored the 454 survey respondents’ input, but many of the 43 also added their own highly effective habits that significantly went beyond the standard advice for good project management.

The seven habits listed here are a combination of core and highly effective habits.

More than 63% of survey respondents from the large group cited the importance of early definition, documentation, and formal approval of project scope; the high-level quality requirements; overall project budget; and required project end date. Experienced PMs call this step “defining project success,” getting early formal agreement on the project’s scope and how to achieve project success within the triple constraints of quality standards, schedule, and cost.

The 43 highly experienced PMs we talked with echoed the importance of early definition of scope and the triple constraints, but many noted their highly effective habit of prioritizing these constraints early in the project. The reason for doing so is that when issues arise and trade-offs must be made in the project, there is already pre-agreement on what is truly important.

A strong systems engineering (SE) approach to procurements was another key factor cited for project success; more than 35% of respondents in the survey mentioned SE as a vital, core ingredient to their projects. There are many important aspects to SE that need to be addressed, but three things in particular were most commonly mentioned: requirements traceability, interface definition, and pre-delivery acceptance testing.

Many of the 43 PMs interviewed stated the importance of mutually beneficial “win-win” relationships with suppliers, contractors, and vendors. Making a habit of being open and honest during negotiations with these vendors was the start of this, as were clear, unambiguous contracts, statements of work, and specification documents.

The goal of these highly effective PMs is to achieve a partnership with each vendor, not an adversarial relationship. If a vendor succeeds, the project will succeed; i.e., vendors will deliver the product on time and within spec in exchange for a fair price.

Forty-eight percent of the PMs surveyed said that proactive management of risk was vital to their project success. Further, the majority of these managers noted the need for systematic and formalized risk management methodologies.

In addition to systematic risk management, many of the 43 PMs added the highly effective habit of properly budgeting for risk, remaining calm and rational when risks were realized, and most importantly, looking for opportunities in realized risks — or, as one PM put it, “finding a way to make lemonade from risk lemons.”

It’s well known to project management success that you should hire the best and most qualified people you can to work on your project. The engineers, scientists, technicians, and support staff who make up your project are a primary ingredient for project success. Over 75% of survey respondents cited the importance of hiring qualified and motivated staff.

The flip side to hiring really good people is the necessity of letting the bad ones go — and “bad” does not necessarily mean that they are unqualified to perform the work they’ve been hired to do.

In fact, it is sometimes necessary to let experts go because they are being disruptive or otherwise degrading team morale. These types of people can do significant damage to the momentum of a project.

Many of the 43 PMs agreed that removing so-called “bad apples” from project teams was highly effective and helped them achieve overall project success.

A large number of surveyed project managers stated that regular communications with key stakeholders were paramount to success. In project management parlance, this is known as “managing the expectations” of the stakeholders. The goal is to build trust and ensure that the customer is never surprised by bad news.

The keys to doing this include getting to know the key stakeholders on both a professional and personal basis, consistently communicating with them, and always being open and transparent with both project successes and problems.

The 43 highly experienced PMs told us that successfully managing stakeholders is dependent on actively soliciting feedback and engagement from these people. It’s easy to forget that your regular communications with stakeholders are supposed to be two-way in nature.

The best PMs not only report on progress and problems to their stakeholders, but they also make it a habit to actively listen — and heed as much as possible — the input from these stakeholders. Significant benefit can be gained from these external parties; they’re frequently experienced ex-PMs or ex-scientists themselves with useful advice to offer.

One of the most commonly cited ingredients for project success in our survey was successful communication, both within and external to the project. A majority of the 43 PMs interviewed commented on the importance of constant, transparent, and honest communication, disseminating information efficiently, follow-up, and documenting as important job functions.

The bread and butter of a highly successful PM is effective information management and communication. The ability to quickly find and process data, past meeting notes, key information, and the like is essential to making solid, fact-based, good decisions.

Many of the 43 PMs were renowned for having highly organized projects with excellent data-storage systems.

There were many aspects of this cited, but the majority of survey respondents kept coming back to four common character traits: honesty, trustworthiness, decisiveness, and professionalism.

The 43 PMs we interviewed had a wide range of personalities, but they all exhibited high energy, were exceedingly passionate about their projects, and displayed a lack of ego, at least when it came to what is best for their respective projects. They also tended to be hands-on, front-line leaders, who enjoyed getting down into the trenches with their team members.

US solar telescope to start operations in Hawaii in 2020

The Daniel K. Inouye Solar Telescope (DKIST) is being constructed on the Hawaiian island of Maui and will be the highest-resolution solar telescope in the world when science operations begin in 2020. 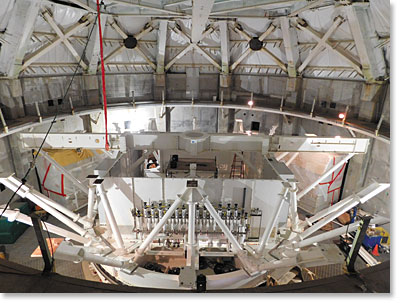 The $344 million facility will have an open data policy, enabling the astrophysics community to freely access data collected by the fourmeter telescope.

DKIST will directly and precisely measure the magnetic fields in the solar atmosphere and help scientists make predictions on space weather events such as solar flares and coronal mass ejections.

This article is based on the full paper that Warner and National Solar Observatory colleague Richard Summers presented at SPIE Astronomical Telescopes + Instrumentation 2016 in Scotland. The paper is available in the SPIE Digital Library at: dx.doi.org/10.1117/12.2228381.